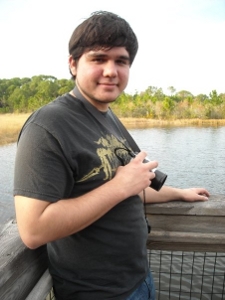 My name is Jamal Fanaian. I have been a web developer for about 5 years. Started working with PHP, and although most of my work is still in PHP, have been slowly transitioning myself to Python. I started using Linux for servers years ago, but only started using Ubuntu around the 7.10 release. Since then, though, I have stuck with Ubuntu for my desktops, laptops, and even servers.

I recently got married, and have been trying to drag my wife to Ubuntu with some luck. She is thinking of switching to GIMP so she can free herself from the closed-source alternatives.

I have been a member of the Ubuntu Florida LoCo Team for about 10 months now. I am active in the Florida LoCo IRC Channel, and attend many of the events hosted by the LoCo.

I also try to participate in social events set up by the LoCo when I can.

I am involved with the Ubuntu Learning team and will be presenting a talk on Restricted Drivers for Ubuntu User Days on January 23, 2010.

I have been doing bug fixes for Launchpad that have landed in devel. For now, they have mostly been trivial as I learn the system. I have made a few bug fixes for Gwibber, most of which are waiting to be merged. I created a website for the Zeitgeist project (http://zeitgeist-project.com) and will start working on a site for the Docky project soon. I wrote, GrooveNotify, a script that uses Ubuntu's notification system to show current playing song from Grooveshark Desktop (hopefully the web version will be supported soon too!).

I am also working on an open-source streaming service, called Pandamon, which will be similar to Justin.tv or Ustream.tv. The goal is to rely on open standards and try to get rid of awful nonfree plugins (a.k.a., flash). Although, because of the current state of these standards, it will need to provide alternatives to fall back to.