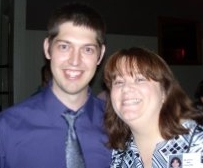 My name is Michael Hall and I live in Lakeland, Florida. I have been a web application developer for more than 10 years, transitioning from Perl to Java, PHP and now Python. I had used Linux on servers for quite a while, but it wasn't until a coworker introduced me to Ubuntu 5.10 that I started using it as my desktop, and I haven't looked back since.

I have a wife and two wonderful kids, and I am currently going back to school after 8 years to finish my Bachelor's degree.

Growing Up Free - An initiative to foster communication among groups and individuals who are using open source technology to improve the lives of children in their communities and around the world.

My oldest child is diagnosed with a form of Autism, and when he was 4 years old I took a spare PC and setup a gaming computer for him based on Ubuntu. He enjoyed it so much that I build similar systems for his friends and preschool, using second hand computers. In 2008 I founded Quinn Co, a Florida non-profit, whose goal is to recycle second hand computers into educational system for your kids.

I had been installing the stock Xubuntu (on these computers, and then modifying them to include age-appropriate open source games and to make them accessible to the youngest children, this made the average install take several hours. After reading the LiveCDCustomization page, I set to work creating Qimo, a Linux distro designed specifically for your kids.

Since late 2008 I have been involved in the Ubuntu FloridaTeam, participating nearly daily on #ubuntu-us-fl, attending and organizing LoCo meetups and events, and I contribute articles to the http://ubuntu-fl.org website. Several times I have enjoyed hosting members of the Florida Team and my home, feeding them copious amounts of food, and generally having a good time.

Gave a session on Cryptography tools during Ubuntu User Days.

Started a new Classroom session tracker as part of the above lessons: https://launchpad.net/classroom-scheduler

Mad eDeb packages for Qimo, and got them included in Universe.

Apply for Edubuntu and edubuntu-dev membership

Incorporate Qimo artwork and configurations into an Edubuntu profile, as well as continuing to work with the Edubuntu team.

Start writing and porting documentation for the ubuntu-learning project.

Improve my packaging-fu and apply to become a MOTU

Continue efforts to expand the Ubuntu Florida Team and advocate for Linux and Open source in my community.

Michael Hall has been an extremely active and well relied upon force within the Ubuntu Florida Local Community Team. On top of being a Great Dad and Husband, he has somehow found the time to develop Qimo (Qimo 4 kids) Distribution, which is an Ubuntu based distribution that has been remixed to include specific games and educational applications. This is similar to edubuntu, except Qimo makes it easy for children to navigate, with it's contemporary theme and large intuitive icons/theme. It currently is using XFCE as it's wm and easily runs on older hardware with great success. Michael and Michelle Hall together founded QuinnCo (a computer recycling charity), and Michael uses Qimo as the distribution of choice when machines are donated out to families in need. He has hosted several events and advocated Ubuntu's use both at work and play. He has also held team only events in his home, which have been very good for team cohesion. The Florida Team rocks even more thanks to Mike's efforts! -- itnet7 2009-10-12 06:13:27

Michael kicks major butt. He does awesome work with Qimo and the Florida Team. Most importantly, instead of just relying on the Internet to get the word out, he hits the road, attend conferences, talks about what he is doing. Michael takes activism to a whole new level. He truly embodies the Ubuntu spirit. -- NickAli

Michael is a "roll up the sleeves and get it done" person. He puts 110% into everything he does. From helping spread the word at meetups, to participating in every worthy cause he sees, Michael sheds a whole new light on community. He is a natural leader, all around smart person, and never leaves a task unfinished. Michael IS a significant addition to the Ubuntu community. - John Pugh

I had the opportunity to meet Michael in person st the Atlanta Linux Fest, there it was apparent that his enthusiasm and excitement for Qimo, the Florida LoCo team, and Ubuntu is infectious. In just a few short minutes Michael has you wanting to participate, and help spread the Ubuntu Spirit. He would be a great addition to the membership body of the Ubuntu Project. I look forward to working with Michael at various Linux Fest throughout 2010. -- akgraner 2009-11-12 20:08:40

I've recommended Michael on LinkedIn, and would enthusiastically endorse him for Ubuntu membership. He is a leader, a team player, and a do-er. His technical abilities are matched by his dedication to contribute something back, and among the Florida team, he is one of those that inspire others. He embodies the Ubuntu spirit and the Florida team is very lucky to have him. -- dantrevino 2009-11-12 22:23:06

Pictures or it didn't happen

Since we didn't have the LoCo birthday party after ALF, we combined it with a Karmic Release party and brought all of the families out to our house in Central Florida for the biggest, best release party ever. We had a grand total of 56 people, including the kids. It was a very good time, we all got to meet people we'd previously only talked to on IRC, got to meet spouses, significant others, and all the children. It was a truly family-oriented event, not just a geek party (though we did do several Karmic installs too). DJ Pak33m brought some awesome music, everyone brought great food, and we all had a good time well into the night.

We got to demo and promote Qimo at this year's Florida Linux Show in Orlando. We where backed up again the Florida LoCo's table, so we all got to have a good time. We provided a computer and LCD for the LoCo to register new members with at their booth, and held a fund-raising contests for a new Qimo computer, which will now be donated on behalf of Chuck Rister.

Because I quite possibly have the best wife in the world, when she recently felt the urge to make some sugar cookies, she decided to make Ubuntu Logos.

(I didn't get a picture of "make install", but it was delicious.)

The weekend after Atlanta Linux Fest we were supposed to host the Florida LoCo's birthday party. However, due to several scheduling conflicts it had to be postponed. Not wanting to let a good excuse for a party go to waste, we invited several LoCo members (some we'd never met in person before) over for some barbecue and a fish fry.

Quinn Co recently held a massive build day at a local children's home. Not only did we get people from all over to join us, but we had the resident kids come out and learn to build computers with us! In the end we placed 7 computers with the home, and had another 30 or so to donate to others.

Quinn Co needed to get 12 working system from Lakeland, Florida to Crossville, Tennessee, so we organized our first every build day to get 12 systems upgraded and installed. The event was a success! The computers were personally delivered to Tennessee the next week.

We were given a free booth at 2009's Scale 7x in Los Angeles, CA, thanks to some wonderful members of the Ubuntu community who heard about our little operation in the middle of Florida. So the same week that I officially released Qimo 1.0, we flew to the other side of the continent to show it off.