This specification discusses implementing a simple and concise backup solution for the non technical users. This application will be shipped with dapper, and be ready for use after installation. This application will make sure that a user either backs up his data, or otherwise is aware of the consequences that may arise if he does not.

Providing an easy-to-use backup solution that's suitable for non-expert users is important. Expert users should install and/or use a more sophisticated backup system. Part of the rationale is to tell the user exactly what he has to do, rather than leave it for him to think up a backup schema.

This specification covers only backing up all the home directories on a given machine (i.e. data and settings files). Audiovisual content will be also backed up, unless it exceeds the backup medium's capacity.

These are out of the scope of this specification:

NOTE: All of this solution should be made with localization as a top priority and a ground level consideration, so it would be possible to translate and localize it.

One week after someone first logs in, a notification bubble appears in the corner of their screen, advertising the backup service. 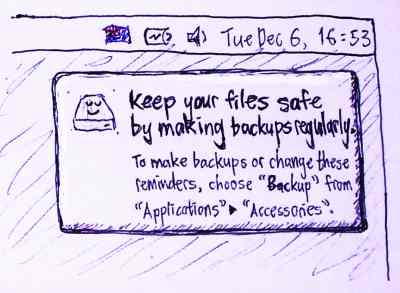 The main program shall be assisted by a gnome-panel applet, that would be responsible for delivering backup alerts and will allow the user to respond to them by firing the main backup program. The main program should not assume too much about the user's knowledge or understanding of a backup process, and thus assumes that a user follows its instructions accurately, not leaving anything for chance.

There will be an option to disable the notification and the feature altogether, to cater for large installations in which a sysadmin would like to take care of backing up machines' data by himself and not use the system. This will manifest in a debconf question at install time, such that it's also possible to preseed the question for mass installs:

As suggested by the mentioned use cases, main program will follow a very focused and limited backup policy:

We will suggest to the user to use either one of his available media devices as a backup target.

Please note, that since this is essentially a user interface problem, most of my design will be around the UI elements and workflow we need to have for integrating such a solution into Ubuntu desktop.

The first trigger to launching the backup wizard, will be set as a default of one week after the system has been installed. The notification will be delivered by the panel applet, which after clicking the applet notification ballon will open a dialog allowing the user to choose among the following options:

If the user chooses to not care about backups, the program exits. If he choses to perform the backup, the Ubuntu Personal Backup wizard will be fired up to continue backup proccess in detail. If the user chooses to be reminded later, we will set another 3 days as a default interval before the panel applet will remind him again to do the backup.

In the event of retriggering after a chosen interval has passed, the third option in dialog 1 will be replaced by:

This will enable the user to choose a different notification interval, if the current one being uncomfortable as the reason for not carrying on the backup at the notification time.

When invoked (either by responding to an applet notification, or by the user itself), the program will detect for available media devices, if no media devices are detected, a proper message shall follow:

If at least one backup device was detected, ask the user if he just wants to do a complete dump of his current data, or possibly backup only files that have changed since the last backup:

This will result in the backend program assembling the backup file according to the criteria chosen, gathering only the changes in the event the 2nd options was indicated, or just dumping all data into the backup file if the first option was chosen.

Moving on, we will offer the user to use the backup medium which is likely to store the biggest volume of data:

If the user chooses the first option, we will remind him again in 3 days to redo the backup. If he chooses to Cancel, then we are going to remind the user to do a backup only on the next close daily/weekly/monthly interval as set in the configuration wizard. Other then that, he will have to run backup by himself if he wants something earlier to happen.

If user chose "Continue backup..." , an instructional window shall open asking the user to close currently open programs, and save any pending files that he is working on. This should allow consistency of the backed up data. After his confirmation, we start the backup process, presenting a progress window that also allows to interrrupt the process at any time:

In the case of using a rewriteable media, the following dialog will pop up:

If the backup was against a non rewriteable medium, then a numbering label will be suggested for the user that includes date, time of when the backup was performed. In any event, labeling the media is an additional assistive step offered to the user. So there will be sufficient metadata on the backup medium such that the restoration mechanism could figure up and do the right thing.

NOTE: Windows 1 through 4 also represent a restoration workflow, given these changes:

At this point , if the user hasn't yet set up a backup interval, the program will ask him to do so:

A similar dialog, as well as the target device selection dialog and an additional verification functionality will be available from the "System -> Administration -> Backup Configuration and Maintainance" menu item. This option will fire up the backup system's configuration and maintainace utility allowing the user to do several things:

In addition, we will provide shorter paths to reach the 2 most important functionalities of the Backup System, through the familiar GNOME panel "System" Menu:

When the backup is finished, a note alert is displayed. Normally these are annoying, but in this case we want to provide extra reassurance that the backup was successful. In the case of backing up to CD or DVD, the alert also displays the suggested label for the disc (or for the last disc, if there was more than one.)

The basic idea here is to provide a GUI wrapping around an already exisitng command line tool that provides incermental backup functionality. The tool of choice is the DAR tool , currently available from universe. DAR is released under the GPL and already exposes a programmable API that we can use. DAR is also feature full and Ubuntu Personal Backup could be later on extended to include more functionality exposed by it. DAR also seems to be in wide use, and it is expected it will have sufficient bug fixes and upstream maintainership.

Meta data to be stored on the backup medium:

FranciscoColaco: We have a problem with the sets for backup. Cluttering the home directory with dot files, there are two kinds of files:

We should backup the first, but not the second. Unfortunately, there are dou subdirectories that have both kinds of files (.gnome2/*) comes to mind.

Maybe we should broaden the problem and thing that configuration files should reside in their own directory, with symlinks to the home directory. Thus, $HOME/.signature -> $HOME/Configuration/signature. Then, backing up configuration would be surprisingly easy.

This is unfortunately the result of historical errors, but can be dealt with. Unfortunately, the number of applications that use those files (and mix them in subdirs) is huge.

So, at the home directory, there should be a clear separation between Documents, Configuration and Application State. Maybe with their subdirectories. Also, should media files be under $HOME/Documents or shoud they be set up in a group home page and backed up on their own? This should be, I think, a new wiki page in itself.

NicholasWheeler: I think if the "System Administrator" wants to back up his entire system, so that it would be easily restorable by putting in either a set of cds, dvds, or pointing to nfs, or a tape drive, it should be possible. The case scenarios don't cover a full system backup, but a full system backup would be pretty easy to implement with MondoMindi. It might take a little more work, but as far as I know this isn't going to be in dapper main at this state, anyways. MondoMindi also has the advantage that you can restore the backups on entirely different hardware, including different drive, (can even go from hda->sdb). An installation about 1-1.5 gigs altogether backs up to one cd-rom.

Why is backup limited to sudoers?

Some Cd writers are able to burn some text on cds.Ubuntu could detect if such a thing is possible with your cd burner and if so ask it he can write a label on the cd (the guy might not want so if he intends to re-use the cd)

JohnCBarstow: Perhaps an option to back up/restore over the network would be useful?

VenkatRaghavanI use [sbackup http://packages.ubuntu.com/dapper/admin/sbackup] which is available in universe. It already has a nice interface with regex support to exclude thumbnails, and IIRC also perform weekly backups.