This specification will discuss what's needed to take the the simple and concise backup application that was introduced in dapper, an make it a robust, finished solution that will be shipped in Edgy Eft. The system will use desktop notifications to make sure a user either backs up his data, or otherwise is aware of the consequences that may arise if he does not. The application described here can form the foundation for a more advanced and complete light dependency disaster recovery system.

Providing an easy-to-use backup solution that's suitable for non-expert users is important. Expert users should install and/or use a more sophisticated backup system. Part of the aim is to tell the user exactly what she has to do, rather than leave it for her to think up a backup scheme, or take decisions herself about when/if to back up.

The following are within the scope of this specification:

Other system changes this spec involves:

Out of scope and planned future Work:

The backup functions will be available from the system menu:

The restore and incremental backup function is based on backup file mime-type detection. Moving the incremental backups and restore out of the main backup window allows us to tighten the workflow and to slim down the main window.

The restore and incremental backup functionality will be accessible to the user following a double click on a backup file in a file browser window. The appropriate actions for this backup file will be offered to the user; either restore files or do an incremental backup using the clicked backup archive as reference. (It's worth mentioning that this indirectly will cater for plugged USB drives, or inserted backup CDs. As the system pops up a file browser window with the folder content whenever such event occurs. We should take care to document this clearly so a user will have no doubts how to restore / refresh a backup he had previously created.)

Since a file inclusion/exclusion selector is out of scope for edgy we will provide a function to backup all files in home or to skip a predefined set of files: temporary files (browser caches, thumbnails), music (by file extension - mp3, ogg, etc.), videos (avi, wmv, wmf, etc). We will never backup the trash folder. A third option will be to back up only a specified folder. We will record this details as a "profile" of the backup, that will be saved as meta data file and be added to the first backup archive.

After the backup is complete the users need to be clearly and explicitly notified that when in the future they wish to restore the data, or to update the backup with new and changed files, they need to insert the CD or plug a USB drive , or just pick a folder of their choice containing backup files, and double click the first backup archive file.

If the user double clicks on a backup file, a dialog will be shown offering the various facilities that are available: cancel; update with new and changed files; verify the backup; restoring the contents of the backup.

The restore window shows the content of the archive in a tree view. Furthermore it allows the user to select and unselect files and to restore to a defined root folder. 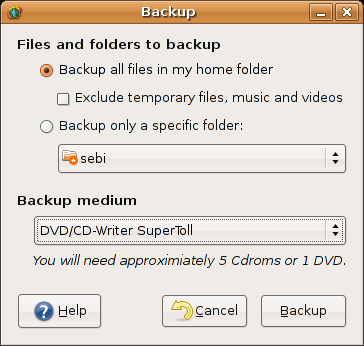 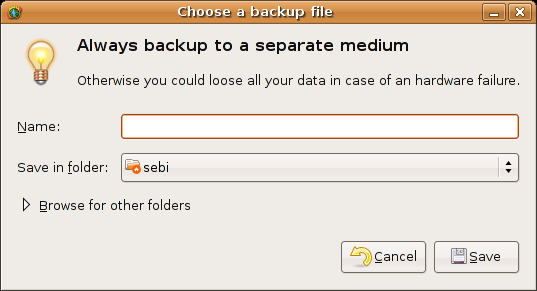 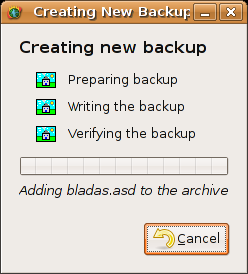 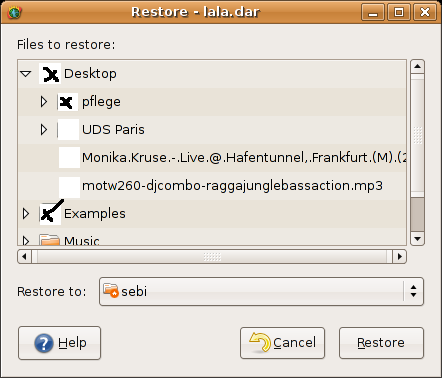 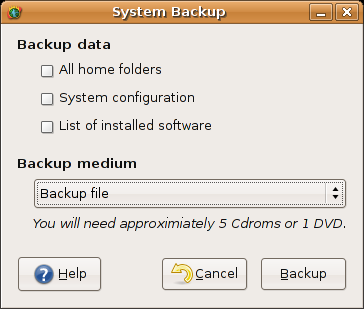 This application is merely one of many ways to BackupYourSystem.