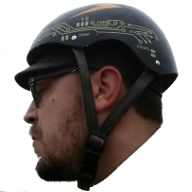 I guess at my core, I'm a hacker: always tinkering, trying to figure out what various pieces do, experimenting. Linux is, for sure, the perfect platform for me.

I've got experience with Bash, Java, C, C++, C#, Python, Lua (awesomewm!), Common Lisp, Clojure, to name a few. It's getting to the point where they all look the same.

I've helped developed a distro-agnostic project called LinuxPadawan that is dedicated to helping Linux users become better users and hopefully, Linux contributors. If you need help in any particular area, whether is is technical or non-technical, beginner or advanced, this is where to get it.

Similarly, if you need help in general, don't hesitate to get in touch. I don't bite.

Also, in case it's not obvious, I ♥ Unicode! ☺ I've even got U+5FCD (忍) tattooed on my arm, which serves as a reminder to myself to exercise patience.

I'm blessed with a lovely wife and daughter that keep me quite busy. The latter has a laptop that I refurbished with Lubuntu on it. The former is an amazing artist and is truly the yang to my yin (even though she prefers OS X/iOS)!

I'm an everyday cyclist and bike commuter and my primary employment is selling handcrafted folding bicycles to an international audience at Bike Friday. I also do various and sundry information services tasks for them.

I have several avant-garde/experimental projects, including Brownian Motion and The ERNIE 4. Most of this work is produced with open source software. I also have an interest in doing livecoding. My friend and I are working on a little project in Overtone (Clojure + supercollider).

Much of my work and the work of artists I enjoy is available through my Creative Commons-licensed netlabel Brownian e/Motion(s), where every release is available for as much or as little as you like to pay.

I have an honors degree in biology from the University of Oregon. Though I find academia to be contrary to the development of science, my interest remains. Bioinfromatics and computational biology may be in my future.

I taught myself programming at age 8 on a Commodore 128. Telecommunications via 1200 baud modem introduced me to the Cleveland FreeNet and subsequently FreeBSD. Later, on a PC, frustration with a limited terminal in Windows 95 led me to find something else. After trying Red Hat on a work computer, Slackware on an old ThinkPad that died, I was in search for an OS for my PPC machine.

Lubuntu is the Future

That's when I found Lubuntu 11.10. I came for support and I fell so in love with the community, I just stayed and eventually became a contributor (and an official Ubuntu Member in 2014). Even after I moved to a normal PC, I installed Lubuntu. Now every machine in the house (and there are many, including a little mini-ITX server and a Raspberry Pi) has some Debian-based distro on it, mostly Lubuntu.

At work, we use Kubuntu as a standard desktop, Ubuntu server for Samba and PostgreSQL (among other things), and even an LTSP set up care of Edubuntu for our manufacturing area.

My main focus is on Lubuntu in the following areas:

I've also begun to help out with packaging in Kubuntu (currently all my Git repos on Launchpad relate to this work). I am an official Kubuntu Member and a Kubuntu Ninja.

I also serve the community in several ways:

It has now got to the point that I have too many teams to list here. See all of them here, but a choice selection follows.

Grow the team and be more involved in events around the state.

Grow QA, especially in the the area of bug triage. Also grow the rest of the team and ensuring we have adequate backup in positions of leadership.

Long term, I'd like to help more with packaging and development.

Ascension to Kubuntu Developer is in order.

Act as an evangelist for passions of the community as well as an apologist for the vision of Canonical, keep the lines of communication open, foster and encourage more activity in terms of sustained contributions, and serve as a voice for the less visible projects of the Ubuntu ecosystem that don't necessarily coincide with current state of development in Ubuntu Desktop.

Specifically within the Community Council, my goals are:

If you have something nice to say about me, please add it below:

Walter is, as stated above, a very motivated and 'hands-on' person in all areas that he is involved in. For the testing cycle he went far beyond any call of duty. This continues apace with the chasing of outstanding bugs and the re-write of test cases for PPC. He is not limited to PPC and helps out on all areas. He is a wonderful example of the Ubuntu ethos, I strongly support his application for full Ubuntu membership. phillw 28th Oct 2012

update: I've had the extreme pleasure of working with wxl for several years now. He's very good at what he does, and is always willing to help and share his knowledge with others. He's been very helpful in many areas especially with the support and testing side. It is through his fantastic work that each cycle lubuntu has enough people to test PPC and AMD64+Mac images. His work with the Lubuntu Team has always been above and beyond the call of duty. He has now taken the mantle of TL for testing and is also now a release manager with duty of checking milestone ISO's are either a 'GO' or 'NO-GO' for acceptance. He's also always ready to answer any questions concerning where Lubuntu and F/OSS in general is heading. He is active with the areas of advocacy and being the Team Leader for lubuntu testing, liaises well with others and also with lubuntu's other sub-teams. I ask that you look favourably upon his application. phillw Sat 12th July 2014

update: What to add? Walter is one of those people who is there if you need to ask about how to deal with a person or situation. He is a wise owl who can see the facts and not the heat. His work with his padawans shows he does not favour people he knows. He is a diligent guy and not only do I recommend him to the Community Council, I will go so far as to say that you have the opportunity to have a fantastic guy join the council. phillw Sat 10th Oct. 2015

Walter not only helped us with the testing task on QA Team. He spent hours trying to solve those called minor problems from unexperienced users on Lubuntu's IRC channel, editing and correcting wiki pages or even managing media resources like Facebook to spread the word. I highly recommend his membership application. -- rafaellaguna 2014-07-11 23:16:46

update: for a few years wxl has been working with us and other teams, and he proved his skills. His abilities to be part of a governance board are out of any doubt, as his work at the Lubuntu QA Testing speaks for himself, the way he organise the meetings and the entire team schedule, the great work at the wiki (fixes, documentation, release notes...) and, in general, all the hard work a higher responsibility a Community Council needs. I highly support his membership application. -- rafaellaguna 2015-10-10 21:46:59

For me as CEO of Lubuntu marketing it's essential to have to have reliable sources that support me and my work. And for me, Walter is such a source. Whenever I need information or support on short notice, I can always count on Walter. He has the ability to make even the most difficult tech stuff understandable for Linux novices like me. And on top, he is patient... Someone willing to explain the same procedure 3 times in a row if necessary. And that's what the community really needs in my eyes. silverlion on Tue 5th August 2014

I've known wxl on IRC for a while now, and I'd say he is an intelligent, helpful person in terms of support and is the current release manager for Lubuntu. I fully support his application to become an Ubuntu member. -- unit193

I have known Walter on IRC for a good amount of time and he is a great person to work with on a wide range of subjects. He almost always has the right answer and has really helped my journey in becoming a better Lubuntu user/contributor. I cannot thank him enough for all the time he has spent working with me so far. Not only has he helped me, he has helped many others in the community. He is a valued member of the community and I fully support his application for Community Council. tsimonq2 on Sunday, September 20, 2015

Update: I have had the pleasure of working with Walter for the past year now. I am at a loss of words for how I can write this, because he has done so much for me and for the community. I see him almost daily helping people out on IRC, always making sure that if he can't help solve a problem, he points them in the right direction. He also occasionally works with me on the Lubuntu development channel to solve a problem, making sure that even after a year, I feel like I am a valued member of the Lubuntu team. Even if it's a simple comment such as "good job" or "thank you," he always lifts my spirits. I could say a lot more, but I would end up filling this page. It has been an honor and a privilege to work with such a great individual, and here's to another great year! -- tsimonq2 2016-07-15 04:13:29

Walter is an excellent person to know, both online and offline. I had the pleasure of working with him on our LoCo booth for Ubuntu Oregon at LinuxFest Northwest. He has done an great job as our LoCo leader and successfully laid down the groundwork to rejuvenate our LoCo. Walter has the natural people skills it requires to take on leadership roles with ease. I fully support his application for Community Council. -- sgclark on Fri 9th October 2015.

During our UMB meeting and talking about documentation, wxl always helps hugely and brings great ideas to the table. I believe he can and will be a awesome Community Council member! -- ahoneybun on Fri 9th October 2015.

Walter is a great guy and a very dedicated one. He was one that collected me kindly on the Ubuntu communities, helping me find my way. Of course, I ended up working with him for Lubuntu, to reduce his efforts to have the release notes ready for the upcoming releases. His leadership skills were always key to have everything on track, as well as on a clean shape. Working with him is always a pleasure, since quality, sympathy, quality and coordination is always granted. His application for the Community Council is more then deserved and I'm sure he will be a great plus to the council since he will help Ubuntu grow with everything he has. -- gsilva on Fri 16th of October 2015.

Walter is a delight to work with in the Ubuntu community, and now in Kubuntu as well. He's a calm voice, always creative and willing to help others even when he is struggling with an issue. I look forward to working with him more, and learning how to do some release management from him. -- valorie-zimmerman 2016-11-18 21:04:00

Walter is as a current release manager of lubuntu to work with as a member of the lubuntu QA team and is nice to deal with on irc. walterorlin on Fri 18th Novemember 2016