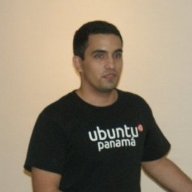 My involvement in Ubuntu

I have been using Ubuntu since Dapper Drake (6.06). I met Eivar Montenegro at the beginning of 2008 (just after we worked on the FLISOL of that year), He introduced me to the Ubuntu Loco Team of Panama (not official yet) and I have been an active member on the community since that.

I have been in charge of Ubuntu Panama since 2010 and i have been organizing ubuntu related activities in my country such as release parties, activities to spread ubuntu and I give talks about Ubuntu on Free/Libre Software related events. I have also wrote some small ubuntu tips.

My Plans for the Future

My work outside the Ubuntu Community