The UbuntuLiveChatSupport aims to provide an interface to communicate to other ubuntu users with the same language & location, as well as to connect to the official ubuntu channel in freenode.net. It also aims to get live chat support from ubuntu users right into the desktop menu, via "System > Help > Live Chat Support".

Another problem with the current way of getting help in Ubuntu requires the user to read and browse documentations, but what most users really want is getting the right answers to the questions straight. Browsing and reading documentations sometimes require one to research on a particular problem. But to get the right answer from an experience user is the most easiest way.

This will use Gaim as an IRC client, but will not alter the main Gaim configurations. It will add the IRC channels defined in InternetRelayChat in Gaim buddy list, namely, Support Channels, and Team Collaboration Channels. Localization channels defined in this page is added automatically.

The user's location & language will be the basis of the default channel that will be automatically joined.

Here are the list of the channels and their descriptions

All of the above localized channels would be added in gaim's buddy list, under Local Channels.

All of the above languages channel would be added in gaim's buddy list, under Local Language Channels.

Gaim's buddy-list will include a group called "Default", and will be based on the user's language and location. It will contain #ubuntu, #ubuntu-<locale>, and #ubuntu-<language name>

The software will be linked right into "System > Help > Live Chat Support" menu, and will have the stock people icon. It will have an intro screen, a freenode.org login screen, a register button. By registering to freenode.org, an information will be displayed about the advantages of registering their nick, and guides you to registration process. It automates the registration based on the information provided. It also includes nick availability option to check if the nick is available, or currently using it.

Optional information are non required information by Freenode. Users can personalize them.

Need to include http://

Nautilus integration and Evolution mail integration is enabled by default. This would be easy to send files to a user in IRC.

Preferences and Buddy List will be saved for a particular Nick. Every nick will create a seperate profile for the current session. The seperate profile will be configurable and be used over and over again. 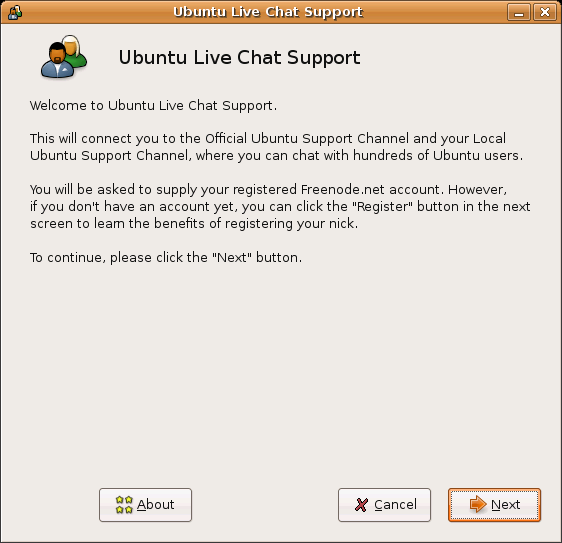 The intro screen will tell the users about the process, and provide a brief introduction about the software.

The login screen will ask about their freenode.org username and password. However, if they are not yet registered, they will be prompted to click the "Register" button.

Login screen have a disabled button if no password is given, this ensures logging of registered nick. However, non-registered user can still login, by clicking the "Use unregistered login" checkbox. 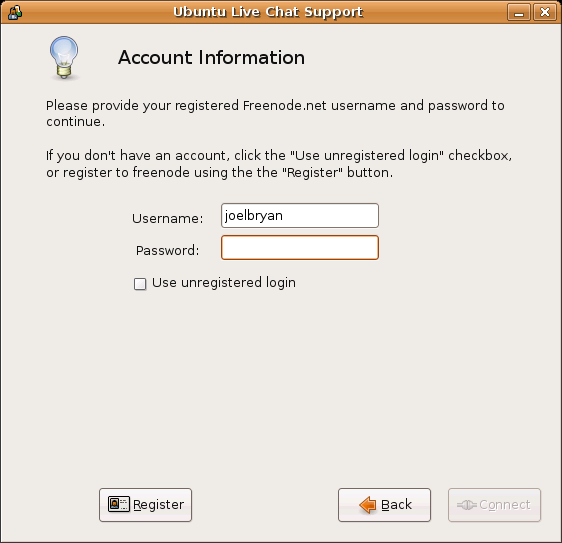 It will also auto set the nick based on the user's account, for example, if Foo Roberts uses "fooroberts" as an account to login to his computer, then "fooroberts" will be set as a nick in Ubuntu Live Chat Support.

If he register the nick "xroberts" using the wizard, then "xroberts" would be automatically set in the login dialog. His new registered nick will be set everytime he uses Ubuntu Live Chat Support.

By clicking the "Use unregistered login" checkbox, a user's nick will have a "guest_" prefix. for example, foo would be guest_foo. 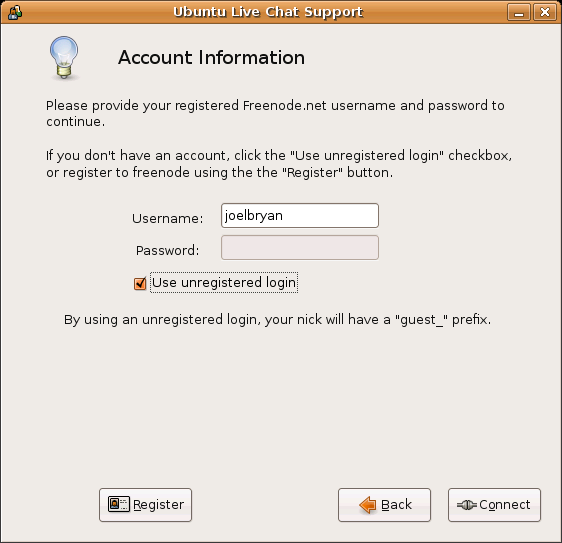 When the user click the checkbox, the password field would be disabled, and the "Connect" button would be enabled.

Users can choose different layout by clicking the settings button. 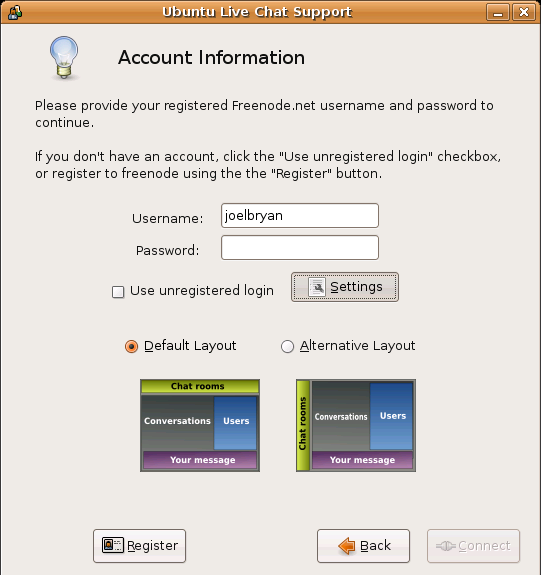 The "Default Layout" is the default gaim layout, where the channels is on top tab, and channel aliases is turned on.

The "Alternative Layout" is the xchat-alike layout, where the channels is on left tab, and channel aliases is turned off.

Intro screen about advantages on registering a nick.

The intro screen will tell the user about the advantages of registering their nick. The intro screen is targetted for Ubuntu users getting technical support in his/her computer in Freenode. 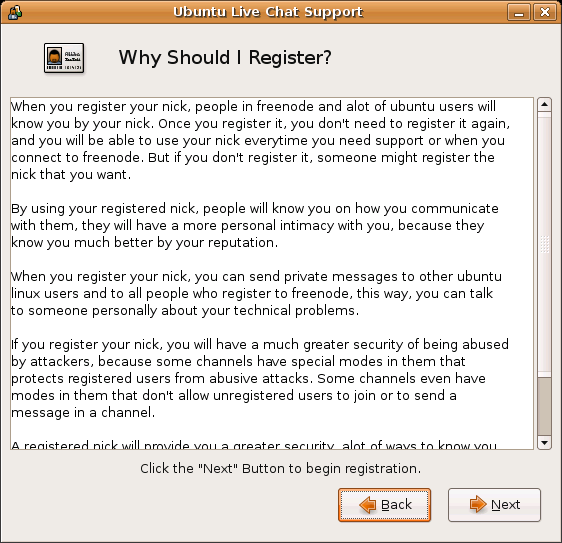 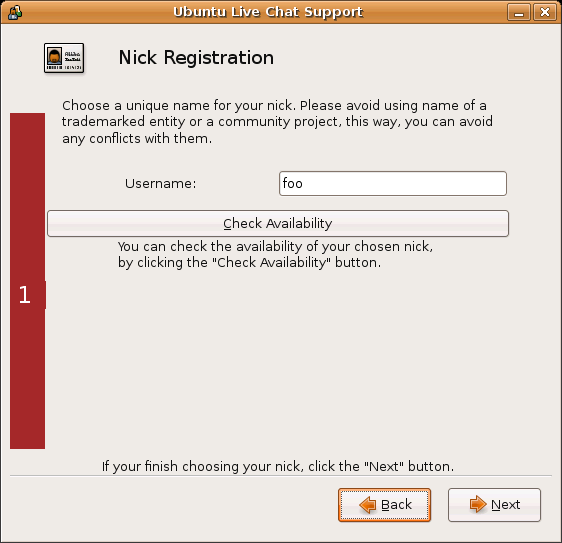 The nick that will be sent to freenode will be defined by the previous step. If a user's nick is taken, it will tell the user to choose another nick, and be able to check it's availability again, until a unavailable nick is found. This step will ask the user's basic information as well as the optional information. The password & confirm password should be identical to send the registration. A warning feedback will appear when the passwords are not identical. 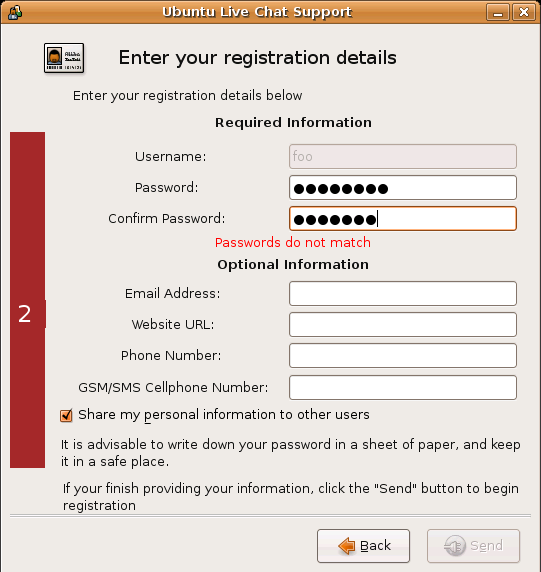 User can set their information private when they unclick the "Share my personal information to other users" checkbox.

Once the registration is successful, the user will be redirected to the login menu, and the user's chosen nick will be set in the username field. The user can now enter a password to connect to the ubuntu support channels. 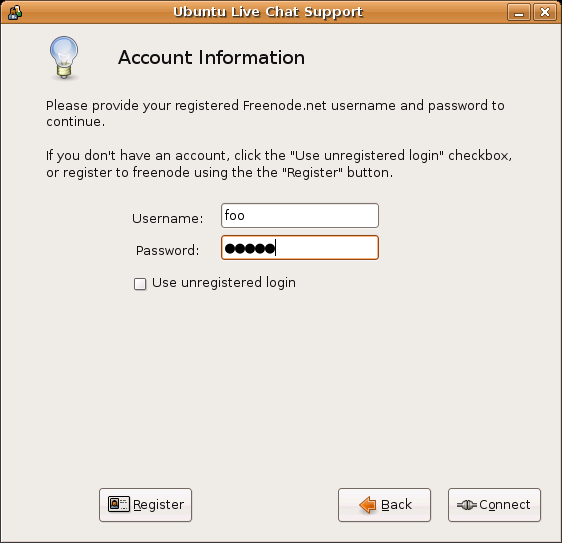 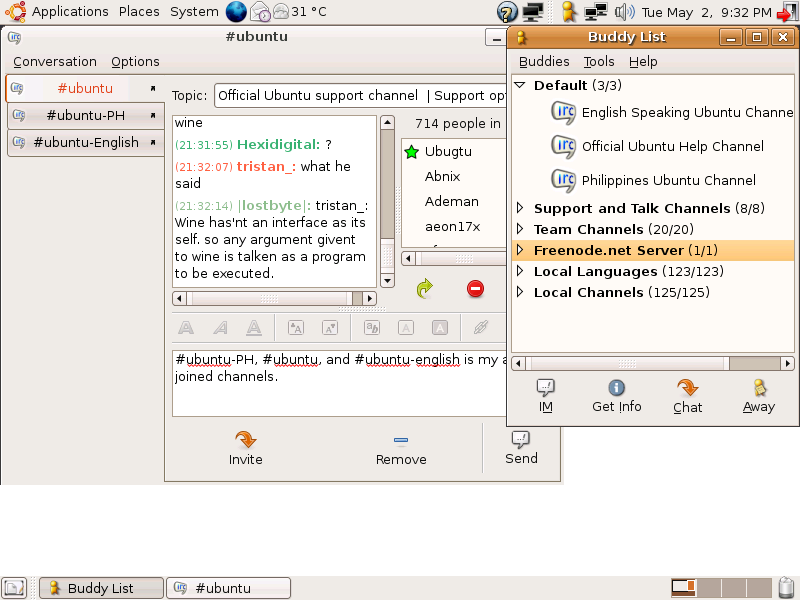 The user will be automatically join to a particular #ubuntu-<locale code> channel, the #ubuntu channel, and #ubuntu-<language name>

Old screenshots is available below.

The code is written in GTK+ 2.0, C and perl, with sh scripts as scripting backend.

This patch for gnome-panel will enable the System > Help > Live Chat Support organization.

Improved release, alot of PID handling fixes, break everything into smaller pieces and make it more modular. And got new implimentations from the recent discussions with lilo, and agreed that a delay should be implimented. It now has a enforced registration delay by Freenode to avoid abuse of Freenode services. Another is, the change of gaim's interface to be xchat-alike.

Third release, version 0.3.14 contains alot of improvements over the older versions. It has, an automated registration system, better GUI improvements, and more...

This is the first release of the software, but it's quite stable.

ubuntu-live-support_0.3.14-4_i386.deb, this solves the issues regarding nick registration. It now use a true nick checking capability, for online or offline nicks. Security imposed time by Freenode.net is added to nick registration to intimidate spammers and abusers.

This is the prepatched version of the gnome-panel that enables the menu organization.

odla: looks real nice. nice gnome integration and i like the use of gaim since it's a Ubuntu default. the auto-registration is real nice and will make it real easy for folks new to Ubuntu and irc to get on freenode and navigating around. i also like being dumped into a channel with folks from a similar geographic region.

glatzor: gaim seems to be quite uncomfortable for irc actions. I think that writing a small irc client around python-irc would be a cleaner solution.

GuillaumeDesmottes : Why not use xchat-gnome? He's very easy to use, have a clean interface and good GNOME integration. IMHO, gaim is really not a good tool for irc chat. I wrote a post on my blog about why xchat-gnome is a better choice than gaim IMHO.

I don't think #ubuntu-<country code> is the right way to go for localisation. For example, #ubuntu-be is not a support channel; support for Dutch, French & German speaking people in Belgium is in #ubuntu-nl, #ubuntu-fr & #ubuntu-de respectively, while the Belgian channel is for the coordination of Ubuntu-related activities in Belgium. --JanClaeys

The same goes for Switzerland. The support channels should be organized by language, not nationality nor location. --TormodVolden

JeromeGotangco: We don't have a graphical IRC client on the default install with the exception of GAIM, hence the specification. There is also irssi, but that is terminal-driven. +1 with JanClaeys on the country code issue. We could still consider the country code, but perhaps for locoteam concerns rather than support? Some of the codes are not even active, so might as well trim it, for exaple, -kr doesn't exist for korea - its actually -ko

joelbryan: I talked to Seveas regarding the channel localization. He made a very good progress with the problems about the local ubuntu channels in freenode. For example, -mx doesn't exist because someone register it, so people just join #ubuntumexico instead, Seveas reclaim -mx and advised them to use #ubuntu-mx officially for ubuntu mexico.

RicardoPérezLópez: The country code works well with Spain and its Spanish #ubuntu-es

I think the best way to do l10n would be to have a gettext "translateable" string that contains one or more channels to show (e.g. CSV-formatted or something similar). That way local teams can decide for themselves how to organize their channels... --JanClaeys

RunarIngebrigtsen: This is excellent. What about the OEM situation? When we roll out desktops and sell support it'd be nice to auto-add our own (paid) support channels like IRC, Jabber and SIP for both Gaim and Ekiga. It seems to me this would be the right tool for such.

I made another app, and is available in UbuntuCommercialSupport for paid support in Canonical Ltd. For auto-add OEM local support, I would like to know the channels that has those services. - joelbryan

I've never used xchat so I think gaim is more than enough to ask for help - maybe not for entering commands, but I don't think that's what the people who will use livesupport will want anyway. To sum up, I think gaim is a good option.

I think, however, that livesupport should be aware when a gaim session is already open and use it instead of opening a new one. And all the information -the account, the channel list- should be automatically added to gaim. I don't think it makes any sense to have 2 gaim sessions at the same time. Livesupport should also respect the window size and layout the user has chosen for his chat windows. If I like tabs under the window, why must I have them on the left?

Additionally, I've asked the people on the spanish channel for their opinion and some of them have told me that it's not a support channel and that they are concerned that people will enter the channel without even taking a look at the guide, expecting to get a satifactory answer as soon as they ask and some might even complain if they don't get it.

Therefore, I think some kind of disclaimer at the end of the registration dialog would be convenient. Something like, please understand that this is not a support channel. You're going to talk to users just like you who might or might not help you. If you have a general doubt please try a look at the desktop guide first (with an actual link to the guide) and if you don't find the information you need then come in and ask yous question clear and politely. Be welcome.

With a 5 or 10 second countdown so people have to read it. What do you think?

RobertStoffers - In accordance with Freenode policy Ubuntu "owns" the #ubuntu* namespace, so any channel registered by anyone else in this namespace can be transferred to the Ubuntu project on request (by Seveas or any other listed contact). Also, channel forwarding can be set up, so in the example -ko and -kr above, #ubuntu-kr can be forwarded to #ubuntu-ko or vice-versa. I'm rather intrested in this project, both as a Ubuntu member and a Freenode staff member, so please let me know if there is any thing you need in regards to Freenode and I'll be happy to help you out (my nick is "rob").

DaxSolomonUmaming - Progress? Will this be nominated for Gutsy? Maybe Hardy. Is there a blueprint for this? This is very useful for everyone, especially newbies.

Joel Bryan Juliano - This project had been nominated eversince Dapper (by Mark himself), and it needs more love. I currently shift my focus on an school work, a Linux distribution based on Ubuntu called "AMA Desktop 2007" where I had put the idea of instant support in the desktop (since currently it doesnt have any documentations). The next step is to be less primitive and brutal, use more C/Python and less bash