Meetings are held regularly on the fourth Thursday of the month.

Discussions on what video chat software to use is taking place on the Ubuntu-ca Mailing List -- Subject: Preparing for the Video Chat meeting on 23 January 2014

Consensus is to use Google Hangouts as the video chat software. A URL will be posted here and in IRC before the meeting starts.

The Google Hangout URL is https://plus.google.com/hangouts/_/7acpj7lt99uvi3m8iirprakd4g?hl=en

There will be a back-channel chat in IRC channel irc://irc.freenode.net/#ubuntu-ca. Freenode Webchat at http://webchat.freenode.net/?channels=ubuntu-ca

Use the correct link from the Team LoCo Portal! You can register for this Video Chat Meeting at the Ubuntu LoCo Team Portal (Optional, but it helps to show activity for our LoCo renewal)

The discussion about "Introductinos" started at 00:02.

The discussion about "Events" started at 00:09.

The discussion about "Other Stuff" started at 00:47.

Witty comment and/or relevant notes about this meeting go here In 2003 the Pioneer 10 space probe goes silent. Did they try turning it off and on again?

Feel free to remove the "Past", "Ongoing", and "Upcoming" headers if they're not needed 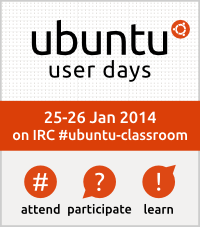 (Back to Canadian Team Meetings)