Members with a significant and sustained contribution to the community are awarded official membership. 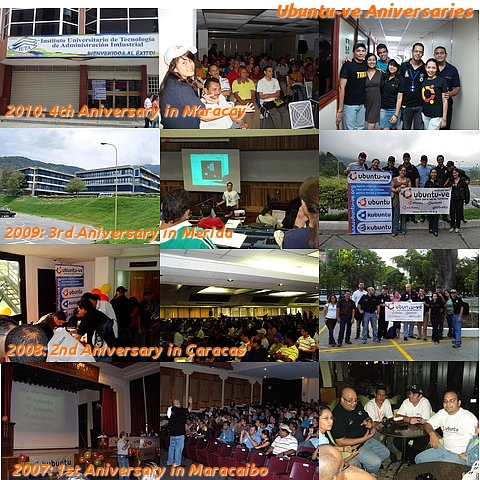 Anniversaries, as the word implies, are events in which we celebrate the years of existence of the Venezuelan LoCo Team. It usually consists of a full day of conferences and workshops on Ubuntu and an Install-Fest, and is organized by regional enthusiasts and team members from all the states, but most of all, it's an oportunity to have a gathering of ubunteros and have a good time... and of course, everybody can join the celebration!

For detailed information about our events, visit the Events page and LoCo Directory.

Our Team has had humble experiences with Open Source development, and Ubuntu Development. We have tried to get Global Jams and other Ubuntu events in our country but more awareness on why to participate still needs to be spread out. Language is definetelly a barrier. We are considering the Onieric Cycle as a key one to turn this around.

We can highlight the inclusion of Turpial, a twitter client developed in Venezuela, to the debian Repositories. this particular event has seen the colaboration of members of the Ubuntu-ve Team with Debian New Maintainers and Developers in Venezuela to reach a common goal. The package was originally uploaded to a ppa and it drew atention from some debian developers. It is now part of the debian repositories.

This is an area that unfortunately has not been taken care of diligently. There has been some scattered attempts to introduce Edubuntu in elementary schools that have encountered some resistanse from teachers. We are now trying the strategy of gaining the teachers first. David Rondón has had some success with this method.

There have been some success stories in taking Ubuntu to schools and most have happened in a few years ago and we have not found a way to make those efforts sustainable, mostly because we depend on volunteers that can dedicate more time NGO/CaseStudy/EBVTechnologyRipples

Most of our conferences, Install-Fests and workshops are done in Higher Education Institutions, such as Superior Technical Schools, Colleges and Universities. It is our belief that these are the seeding grounds for the future crop of FOSS users that will lead the way to meet Mark's goal of 200 million Ubuntu users in the near future. 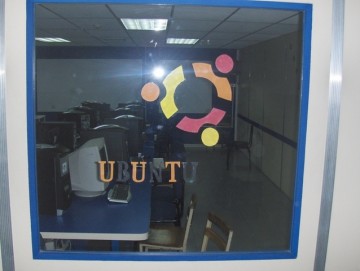 Ubuntu is a reality today in the public sector. The local Government acknowledges and seeks the expertise of our community members. Several members from the Ubuntu Venezuela LoCo Team are currently deploying and giving support to a large number of Ubuntu workstations and servers, and training Ubuntu desktop users in major Venezuelan public institutions.

Cesar Sevilla has made several migrations at the government level to implement Ubuntu on workstations (office), Servers and classrooms, which allowed a greater diffusion.

There's an increasing number of local busineses using and/or offering solutions based on Ubuntu and other FOSS platforms and products.

Many of them have contributed back to the community, sponsoring events and organizing workshops.

The local NGOs have proven to be an invaluable support for spreading FOSS in Venezuela. Big community events, workshops and release parties have been sponsored by these NGOs. Many Venezuela non-profits use free software and employs community members in order to maintain these systems.

Over the last three years, the Ubuntu Venezuela LoCo Team has been working very hard to promote free culture ideals in our country. We've been giving some conferences at events about free culture and licensing, and providing guidance to Venezuelan artists that wish to release their work under free licenses. Our community podcast also promotes free culture, including interviews with ubuntu-ve members that have affinity with this movement.

We have been pretty successful in promoting Ubuntu and FOSS in local media. A lot of articles have been written and published in local and national newspapers and magazines. We have also participated in some the local/national TV channels and popular radio stations.

From the beginning, the Ubuntu Venezuela LoCo was built by people that used different distros and free operative systems, but due to it's rapid growth (as to become the largest community of Linux in the country!), many users of other distributions saw the benefits of a big and helpful community... and Ubuntu became their primary operating system! We value and appreciate our relationship with the broader GNU/Linux/FOSS community, specially with the Debian and Canaima community, where we contribute actively.

The new Ubuntu Venezuela Community Council has set some short and long term goals for the team:

* Ubuntu Members -The Ubuntu Members are recognized for the great work they have done and are doing for the Ubuntu project. These Ubunteros are subject to a very thourough inspection by the Council of Regional Membership - Americas.https://wiki.ubuntu.com/Membership/RegionalBoards/Americas

Without doubt our greatest pride is to be part of the satisfaction of the people that with a big smile in their face walk out of one of our Install-Fests happy with their shinny and new Ubuntu OS! ... and we do our best to make them feel that as Ubuntu users, they are not alone in this road to freedom ... they belong now to a bigger family... the Ubuntu-ve family!

But this is only possible with the participation and collaboration of a community, team work, and the will to fight against adversity and differences that often exist in any group of people and organizations. Only in this way we can conquer goals and achieve what has been achieved by Ubuntu-ve.

Throughout this time, all ubuntu-ve members that have passed through our growing family have left their footprints captured in this community. All those that have provided many good ideas and hard work, those who have given a little less but with with the best of faith, goodwill and hope, and absolutely all members who have worked for our LoCo Team, are valuable, and we trully thank them.

There is no greater pride than being valued and recognized positively for our work and effort.