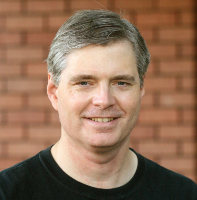 I first started using Unix in 1989 and have been using Linux since 1994 when I co-founded Silicon Valley Public Access Link (SV-PAL or www.svpal.org), a FreeNet for Santa Clara County that is still a self-sustaining not for profit Internet service provider (ISP) today. While running various Linux distributions I have contributed bugs and patches to several open source software projects as I have "scratched my own itch." I am a retired Debian Developer because packaging is not a passion of mine though I have great respect for those that do this important work. I was a full time employee with the US branch of SuSE from 1999 to 2001. From 2000 - 2002 I consulted directly with Dr. Douglas Engelbart on his Open Hyperdocument System project.

Summary: I have worked since 2008 attending and organizing events in California including release parties, global jams, Linux User Groups and OSCON. I was approved as an Ubuntu member in 2009. I was elected as a leader of the California team in 2012.

Detailed: Since June, 2008 I have been active with the California LoCo. I have represented Ubuntu at Lindependence in Felton, CA in June 2008 and numerous Linux user groups (LUGs) while handing out CDs, answering questions, participating on mail lists and in participating in LUG activities. Due to the density of Linux activity in northern California I feel it makes sense to work with and support LUG efforts. I helped organize and/or attended Jaunty launch parties and was a co-organizer of our OSCON booth. I have worked to improve our team's wiki presence. I have been working with the team to expand the ways we communicate to include identi.ca/twitter and Facebook with positive results. During my trip to Nairobi, Kenya I worked to build the Kenyan Team.

In San Francisco I am a director of partimus.org helping middle schools prepare donated computers with Linux for labs and students.

Continue to support local user groups and the team. I am always looking for ways to help promote the adoption of Ubuntu and Linux more broadly in support of bug #1.

Related pages shows the search results for all the wiki pages that contain my user name, but not all that I have edited.