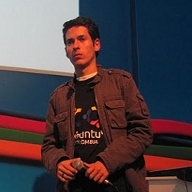 These are the Teams in which participated with much regularity.

Contributions to the Development of Ubuntu

I'm helping with the editing and translation of the manual of ubuntu and the editing the wikipedia page. in the version in Spanish.

I proposed the name Perceptive polecat for Ubuntu12.04 link

I helped with the testing phase for Lernid - 2011 screenshots

Projects with My LoCo: Ubuntu-Co

I am currently the project leader in Ubuntu-Co, Where we are charged with managing the mailing list and provide support in the channel IRC and LaunchPad (Questions)

More information about this team: https://launchpad.net/~ubuntu-co-soporte-team

I am currently the project leader and creator of this project. The project is responsible for handling the documentation of official team wikis

More information about this team: https://launchpad.net/ubuntu-co-documentacion

I am currently the project leader and creator of this project. Currently only in Spanish

More information about this team: https://launchpad.net/ubuntu-co-podcats

I am currently the project leader in Ubuntu-Co. Where invites all community members to manage games for Ubuntu.

More information about this team: https://launchpad.net/~ubuntu-co-jugadores-team

UbuntuWeeklyNewsletter where my posts appear

Events about Ubuntu and ClassRoom_ES

Currently I contribute by participating in the mailing list of the community and the team I support equipo de soporte de Ubuntu-Co, in which I have resolved doubts of many of my classmates.

Assist in organizing hacklab held in the city of Cucuta in 2008. Gallery

Join the Global Bug Jam GBJ for Ibex, which helps connect bugs with software packages ... I hope the next best contribute GBJ.

Organizer of the Global Bug Jam for karmic in my city, making speeches about the handling of bugs and implementation of translations. Photos of the day: GBJ Cucuta

I will participate as an instructor in the Ubuntu User Day takes place on Saturday 23 January, with a workshop on the management and file system permissions.Logs

Join the Ubuntu Open Week, which took place on Monday May 3, 2010 with two talks: file systems and Ubuntu Linux permissions.

Participates as an instructor in the Ubuntu User Day that was held on Saturday June 5, 2010 where in the opening of the day, a discussion of permissions in Ubuntu and how to set up a home web server in Ubuntu

Organizer and promoter of Latin American ugj, which was held on August 29, 2010

Coordinator, promoter and instructor of Ubuntu Open Week in Spanish, to be held from 11 to 15 th October, 2010. Session1: knowing ubuntu, log and slide. Session2: My first steps with the terminal, log and slides.

Participated in one of the IRC chat hosted by Ubuntu-ve, as an instructor on the day of the signing of Coc. Logs slides

I participated as a speaker on the FISLYP - 2011 (Girardot city), making a conference on how to contribute to the development of Ubuntu. Slides, photoGallery.

I participated as a speaker on the software freedom day SFD - 2011 (Bogota city), making a conference on how to contribute to the development of Ubuntu. Slides, photoGallery and my planetpost

I participated as a speaker on 'the 1st Binational Conference' with the conference: Ubuntu in the Cloud - 2012 (San Cristoba, Venezuela). photos slides

I participated as a speaker on the FESC event called 'Proyectando' with the conference: Ubuntu in the Cloud- 2012. photos slides

In the group of GNU / Linux which I do at my university part contributed to the spread of SL in all fields, giving talks and training sessions. Gallery

Participate as an organizer in the Days of free software that took place in the city JSL2009. Galeria

Participation in the FLISOL 2009 as an installer in the city of Cucuta. Gallery

Participation in the FLISOL 2008 as an installer in the city of Cucuta. Gallery

Participate as a speaker at the 2010 FLISOL made in my city, talking about free software communities. Gallery

I participated as a speaker at the Barcampcucuta2010:Slides, Gallery.

I went FLISOL2011 coordinator in the city of Cúcuta. Flisol Wiki Gallery

Sergio has been involved in several projects in the Colombian Local Team and has done a great job! . He is definitely an outstanding candidate for becoming an LoCo Council Member. -- Dante Diaz , (Ubuntu Member and Ubuntu-pe Team Contact).

Sergio is very involved in the Colombia Ubuntu community. He provides ideas and make them happen with great effort. He's spreading the Ubuntu message in many ways and working hard for our distro. He's definitely a good candidate of the Ubuntu Council. costales.

I have worked together on Ubuntu-co, I witnessed the hard work done by sergio, supporting, directing, assisting and educating the ubuntu community members in Colombia, is that with his great experience will contribute more to the entire international community and LoCo Teams. Juan Marquez

Sergio is a big contributor to Ubuntu Colombia, does an excellent job support through mailing lists and IRC chat. He does a great job also for dissemination through conferences and social networking. - julianarmando

Sergio Meneses is 100% committed to all its projects, is a person who works for the community of Ubuntu Colombia is an example for the entire community. Sergio it is my Sensei. - JoseGutierrez

Sergio is one of the most active members of the community, always 100% of the time ready to work and give way to new projects without leaving the current. I had the opportunity to learn a lot from participating in the Ubuntu Classroom sessions, learning from the project documentation from which he is the leader, he contributed to my process as an official member of ubuntu, and has been one of my biggest guidelines in the world of free software more specifically ubuntu CesarGomez

I've worked with Sergio organizing the Ubuntu OpenWeek in Spanish and he is very commited to Work for and with the Ubuntu Community. Sergio is the right person when you want a job get done. - Josernesto

I know Sergio for 3 years and has always been a person committed to the Ubuntu project in Latin America, even beyond the borders of Colombia. between the skills that Sergio has are able to call, analysis and conflict resolution, wide participation in the Ubuntu-co activities and full support in ubuntu-ve. - David Emerling Rondón: :-D

Sergio really more than a member of the Ubuntu community is a great friend who always slope to collaborate, participate and help everyone who needs it, is one of the person who says no when you can help and that even social networks, web, irc, forum and others.!

Sergio is a person who has been pending to encourage the integration of local teams of ubuntu at the level of the Latin American region. Sergio Congratulations for your great work. Nelo R. Tovar

Sergio is one of the most enthusiast Ubuntu members I've ever seen, always present in IRC, ubuntu planet and events he encouraged me to participate as speaker in Ubuntu OpenWeek in Spanish . - Fitoria

I strongly support the nomination of Sergio. He's one of the most passionate guys I've ever met; he eats, sleeps and breaths Ubuntu. Sergio's work in the Ubuntu-co Council is amazing and he has been a great leader in the wider Latin American community, promoting the integration of the regional LoCos and organizing great events, such as the Ubuntu Open week in Spanish. He will definitely be a great addition to the council, bringing new, fresh and exciting ideas. - Leandro Gómez, Ubuntu LoCo Council member

I know Sergio for long, and he is one of the most energetic Ubuntu Members I know, working really hard for the community. I don't want to repeat all the stuff people said before me, so I'll just say he has all it takes to be a LoCo Council Member. PabloRubianes

Sergio is a young man working hard for its beliefs. He has plenty of road ahead on its path and it would be a nice touch on the Loco Council. Andres Mujica

Sergio is a wonderful person, his work is hard for the local team of ubuntu Colombia and Venezuela team, Sergio is known for its contributions in support, conferences, translations, etc. Sergio demonstrates a breadth of leadership in our council ubuntu Colombia. Sergio has my support to be a member of ubuntu IngForigua

He is one of the most active members of the Ubuntu-co council, He is the main reference in the area bordering Venezuela, has participated in several events such as Flisol, UGJ as an organizer, lecturer and installer, Also gives support to users in the IRC channel and mailing list. czam

He is a active members of ubuntu team Colombia, colaborating in promotionals events, translation and support to Community Colombian and Venezuelan too. Nathalie Colina

Sergio is a young men with everything ahead of him. He has vision, he wants to be there, he works hard for Ubuntu and the Team. He loves what he does and following the proper road he would be an amazing asset for Ubuntu as a member. AndresMujica

Same (Sergio) now is one of the members of the Council from Ubuntu Colombia. He is very committed spreading Ubuntu in his land (Santander). He is a great help for Ubuntu-Co and for Ubuntu, always looking for new ways to help us!! - JulianAlarcon

Sergio as a member of Ubuntu Combia promotes brotherhood among all the members belonging to the community or beyond. helps all members who wish to more actively link the different processes or projects that occur within the community. - JoseGutierrez

As the above entries state, Sergio is a great person to have on a team. He has been with lubuntu wiki / docs and is the team leader for this team. He has endless enthusiasm and also the ability to 'do the job'. A very brief record of his major work is here. I ask that you look upon his appiciation favourably. phillw