Gartoon Redux is an expansion of the Gartoon icon theme used in Edubuntu. It includes a few hundred additional icons used in GNOME applications, as well as many application-specific icons.

This theme intends to keep the peculiar cartoon-like style of Gartoon while expanding its coverage. Its most important visual elements are dynamic perspectives, thick dark outlines around each icon, bright and saturated colors, liberal use of gradients, large white reflection blips, and drop shadows. The depicted objects are deformed to increase roundedness and simplified to be readily recognizable even at small sizes. Currently it contains icons for most of the GNOME desktop, as well as the following programs:

The icons come in one version for all resolutions, but there are PNG renders included in the package to speed up loading. Compared to Gartoon, over 500 new icons were added. To reduce the size of the theme, there are over 1500 symbolic links for icons with duplicate appearances.

The current version can be checked out from a Bazaar repository in Launchpad. There is also a PPA with a Debian package available.

Here are some example icons: 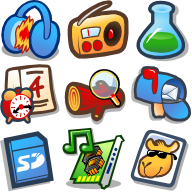