This concept is for a name of an icon theme and i was inspired by the name of the element Ununbium on the periodic table, and I thought Ubuntium (although I spell the title wrong) I'm not exactly sure what the icon theme will look like but I would like the icons to resemble what you are clicking on them for, for example if its folder with pictures there needs to be some kind of picture logo (or pictures in the folder previewed) so the user can easily be able to distinguish from different photo albums. Device icons need to be similar to what they are in really life so that a user can think "Oh thats my camera" and not " is it drive f, or d" and having to click every single drive to find what they wont. Icons need to be easier to access from the desktop. There needs to be some way of putting a usb stick or cd rom what ever it may be and instead of the annoying what "do you want to do" it pops up in a dock kind of thing. The icons need to be more graphical and nice for the eye to know what they mean instantly. Since coming from windows myself I was fortunate to be persistent at using linux because of getting viruses all the time and not wanting to be anti virus and the next best version of windows to enjoy the graphics. Remember not everybody is like me and they are going to want something flashy and original, nothing that has been done before will grab there attention. so i'm not exactly sure but I will hopefully work on some icons over the next few weeks and see what I come up with. 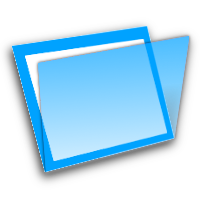 This is what have come up for my first try of a folder Icon, it isn't obviously total original and I will try to refine and tweak it to make it look better. Please feedback is wanted so I know what I need to change my opinion is probably not yours and you might have some good points.

Here is my device dock, simple yet in principle should be quite effective, This allows someone to keep their desktop tidy no matter what device the mount and unmount from their computer, icons don't get muddled up yet you can still easily access your icons from the desktop.

here is this dock with minimize and maximize buttons(the triangles). Its just a concept other triangles that look better will be used such as the one from the emerald slatehorn theme.

I haven't been able to create anything very recently and as I have been busy. I will also include the home folder as well, maybe add an arrow for show/hide? as Kerberos suggested. I will re-fresh on the whole device dock, Idea it is intended to make things easier but not a key change. AWN is great buy like me i prefer to still have a bar at the bottom and not a dock, it is unlikely Ubuntu will have a dock by default so my idea sort of bridges the gap. Also as Strabes said he uses the device mounter in the gnome panel I have used that but it starts to make the bar very crowed. Last note It is to tidy up the desktop and devices still appear on the desktop whether you use AWN of the device mounter - Furlow

Okies well just let those who don't know I'm not a programmer and have no idea of how I would actually implement this, I just had this idea. To add to my original idea the main reason I wanted this was because you can easily go to places a lot of time I don't use places, when you first start up your comp or you switch to another blank desktop its just more "infront of your face" and well keeps your drives separate to icons so they don't go on top of each other and get all messy. Well I have been busy with school work so I haven't been able to make any updates but I'm sure AWN or Cairo Dock will work as a base for the code. Its quite simple as far as what needs to be added to the code which is basically when a removable drive or hard disc(which will probably always be there as you are unlikely to take it out) is put in the icon pops up and when unmounted the icon disappears. Also the feature of it making apps appear would have to be turned off. For unmounting I thought instead of the general right click you should be able to drag the icon off the dock and on to the desktop which unmounts it for you, by the way the icon will disappear with some compiz effect and wont remain on the desktop. Oh well thats enough ideas for now maby this could be put into another page cause its obviouly not going to be done for Thursday. - Furlow

* In gconf-editor, there's an option to let media appear on your desktop. So when you plug in your camera, external harddisk, the icon appears on your desktop. And in AWN (that's a dock) they can also automatically pop up. Arnout.

Hi, Arnout Yeah I know about awn and that but i guess that portion of my idea should maby be left to awn. I do have an idea that for me because my desktop isn't the tidiest and I needed to be able to open things quickly with out CD and other icons getting mixed up on top of each other, there should be a portion of the screen designated to Drives and media sort of like a dock I guess. Thanks for your comment it was greatly appreciated

I really like it! Maybe you could include the home folder as well, maybe add an arrow for show/hide? I like the idea of one click access to media. I normally combine everything into one bar on Ubuntu and ditch the 'places' so everything is 3 clicks for me.

This is an excellent idea. This is one of those things that really adds polish to an operating system while also adding usability and not impacting on the majority of users. This is definitely something to be considered for 8.04

I really like the device dock idea. It would help separate normal folders on a user's desktop from mounted media. I already use the "Disk Mounter" applet for gnome-panel anyway because I don't like having icons on my desktop. -- Strabes

This could be Something to replace the panel at the top. Instead of having a solid bar, the bar could be broken up, and maybe displayed on the side (for the aplications, places, system, and quicklaunch part, then the rest (such as time, user, sound...) be relocated to the bottom right (similar to windows), not as an entire panel, but as a section of the desktop, so it looks like its integrated with the wallpaper. I will have a go at scething this in gimp, but my editing skills arent all that great, so dont expect much.

I love this idea. I like having no icons on my desktop, so I turned them off with gconf-editor, but I miss being able to quickly get to different mounted drives and devices. I'd love to see this become a reality. - Michael

I think this is absolutely brilliant. Would love to see this included in a future Ubuntu release, probably IntrepidIbex . But, it's just a genius concept to me. What would you use for your codebase? AWN? Cairo-Dock? Also, would it only show mounted media, and hopefully not things like quick launchers? Anyway, I'd totally use this. -Alliance4